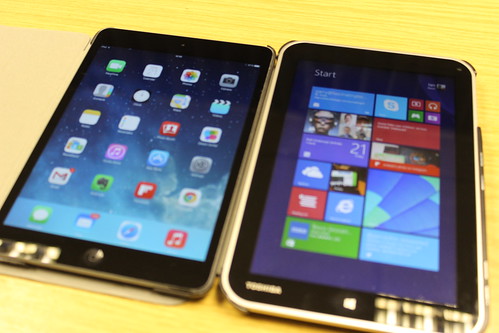 Ok this may not be the first iPad Mini with Retina review but it’s a new device to me and I thought it would be good to try it alongside my 8 inch Windows 8 tablet. A couple of months ago starting using a Toshiba Encore 8 Windows tablet and as you can read in my review I was pretty pleased with the device.

A couple of weeks ago my 3rd gen iPad died and as I use it a lot for music production I need an iOS devices so I replaced it with an iPad Mini (Retina) and this has given me the opportunity to compare Windows 8 and iOS on similar sized and priced device. The list price for the 32GB Encore 8 was £249 and is now £199, the 16GB iPad Mini with Retina is listed at £319 (but you can get it from around £279.99).

First let’s look at the hardware, the iPad is thinner and lighter than the Encore and does feel a more “premium” product but the Encore doesn’t feel cheap and really there isn’t much between them, it just that the iPad feels better in the hand.

With the iPad you just get the Lightning connection whereas with the Encore and other Windows tablets you generally get a MicroUSB port, MicroHDMI port and a MicroSD card. The MicroSD card support means you can add extra storage for putting on it whatever you want (but not Windows Store apps) something you can’t do on an iOS device. You can of course go for a larger capacity iPad if you need the extra storage, a 64GB iPad Mini comes in at £479 where as a 32GB MicroSD card can be picked up for around £10. The MicroUSB and MicroHDMI ports enable you to connect up to a TV or USB device but you are probably going to need a MicroUSB to standard USB adapter and a MicroHDMI to HDMI adapter to connect it up anything. To connect the iPad up to a monitor or camera you are going to need an adapter and Apple adapters are generally more extensive for the Windows connectors. Also the MicroUSB port can be used to connect up any USB device,  you can connect up cameras, hard drives, keyboards and the list goes on and this flexibly is a real advantage for Windows.

The most obvious difference between the devices is the OS. It’s funny that both iOS7 and Windows 8.1 have their detractors but I like both operating systems, I am not going to try and review iOS or Windows 8.1 but highlight some of the differences. iOS 7 is very simple to use, you have the familiar row of icons to launch apps whereas Windows 8 has live tiles so they are not just app launching buttons. The live tiles actually give you information and animate so Windows looks more alive than iOS. Apple’s OS is probably easier to use out of the box than Windows 8 but I prefer Microsoft’s OS.

Both operating system handle multitasking very well but I prefer switching between apps in the Windows where you can swipe in from the right. Also in Windows you can split the screen when running multiple apps at the same time. In portrait mode you can split the screen with one app on left and one on the right with your own split point. You can do things like email on the left and the browser on the right or Word on one side and a music app on the other side. I use this pretty often and it saves you from switching from app to app. Multitasking and the screen handling on Windows seems much more efficient for me than it does on iOS.

I should also say that that  app performance is very good both devices. 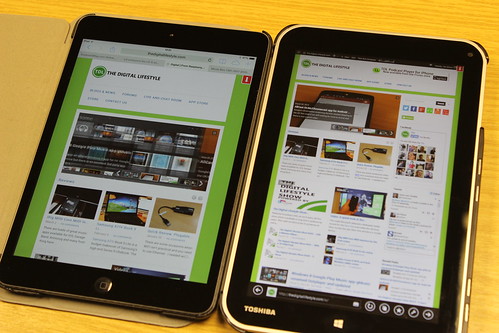 Where you can see a big difference is with the apps. There are many more apps available on iOS than there are on Windows but it’s not all about numbers. Many apps are available for both Windows and iOS and this highlights one of the problems for Microsoft. Where apps are available on both operating systems I find that most of the time the iOS apps are better quality. For example the Kindle app works ok on Window but the iOS version has more features and feels less buggy (the Windows app never seems to update Whisper Sync correctly) and this is repeated with other apps. The iOS versions of apps always seem to get new features first, for example Evernote has a new presentation mode which isn’t available for the Windows Store app, it may arrive at some point but it always seems to be iOS that gets the features first.

There are some apps which are better on Windows than iOS, for example Netflix look better in Windows than the iOS version and there are some apps like NextGen reader that are Windows only and work very well. Most of the big name apps are on Windows and iOS but there are niche app that are still missing for Windows. I have some nice music apps on my iPad from the likes of Korg and Moog which are not available in Windows and I am sure there are many other niches that only support iOS and this is an area Microsoft need to focus on.

Once nice thing about the Windows tablets is they come with Office 2013 which isn’t available for iOS (but could be coming soon) and with Windows 8 you can install any Windows program you like on it, so you could install iTunes, Photoshop, Google Chrome or whatever app you want, this makes a Windows devices a very flexible item but I have to say desktop apps are not ideal on an 8 inch screen. You could of course plug in a keyboard, mouse and external monitor and use it as a desktop PC if you want.

Most people won’t be comparing an iPad and Windows tablet side by side at home but they may be in when looking at purchasing a tablet in a store and this is where the Windows Store need more development. What I can say is that a Windows tablet is a good alternative to an iPad, it really is down to your personal needs and budget. I love the iPad Mini but aside from the music apps I am very happy using the Encore as my day to day tablet small tablet. 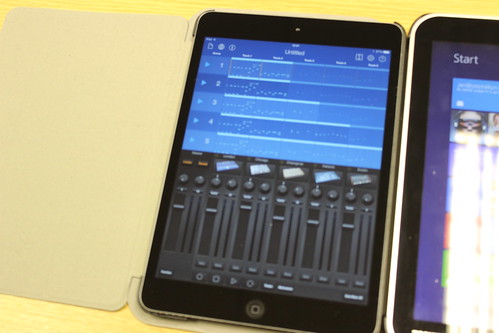