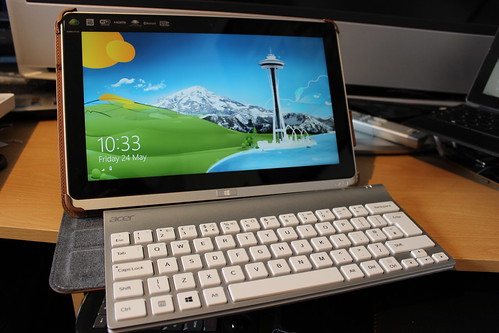 Acer continue to come out with new Windows 8 form factors and the latest I am testing is the Iconia W700 tablet. The W700 is an 11.6″ tablet running Windows 8 with a core i3 processor, 4GB ram and 128GB SSD drive. The W700 comes with a stand/docking station that can be using in landscape or portrait mode and slim case that comes with a Bluetooth keyboard, more on that later.

The W700 has a really nice display it runs at 1920 x 1080 which looks extremely sharp and clear. In Windows desktop mode the high res display looks great but it does make it almost impossible to use with touch as the targets are so small you just can’t press them with your finger, this isn’t a fault with the W700 is a problem with Windows, hopeful Windows 8.1 could fix this. As a tablet it’s not particularly light, it weighs about 925g and is a little on the thick side but using it as a tablet in landscape mode is it very usable and the i3 processor makes the metro apps work very well. Acer say you should get about 8 hours battery life, I found it as closer to 5 hours but that is about what I would expect with a device like this. Having the SSD makes the Windows startup time very fast and the resume from standby is as quick as my Surface or iPad. The device has a nice solid with a USB 3 port, headphone port, volume rocker and power button on the side and heat ports on the bottom.

The W700 comes with a very slim Bluetooth keyboard which has a nice typing action and in combination with the provided case makes it in to a neat notebook, the case protects the tablet well and with the addition of the keyboard is a very usable. One this that is missing is a trackpad or mouse pointer on the keyboard, on my Surface when I need to use the desktop I can use the keyboard and trackpad in one self-contained unit but with but with the keyboard having no trackpad you need to use a mouse. As it’s got a touch screen you may think you don’t need a mouse but the hi-res Windows desktop means you are going to need one. You could use a Bluetooth mouse but its just another thing to carry around.

Overall I was impressed with the W700, it’s a good hybrid Notebook/tablet and works very well in either mode. If you need a tablet that can be used as a notebook then this is a good device, it’s not a light as the Surface Pro but its cheaper and the Surface doesn’t have a dock like the W700. The lack of trackpad on the keyboard is irritating but not the end of the world. The tablet costs around £549 on Amazon.

In this video take a look at the 7, the stand and the keyboard/case.