The MG-850HD is a novel concept a relatively lightweight 3-LCD projector with 720p resolution and an iPhone/Pod/Pad dock. 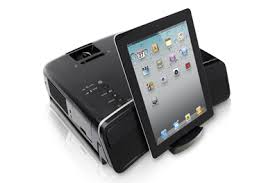 Whilst it is never going to be as light to carry as some of the Pico projectors out there it is certainly portable and with a light output of 2800 lumens it literally outshines the Pico competition. This is particular noticeable in daylight scenarios where Pico projectors would be completely washed out the MG-850HD still shines through.

Unlike many projectors the MG-850HD has built in speakers. Whilst not perhaps audiophile these are perfectly adequate for presentations and are better than some iPod docks I’ve heard. Although rated at only 10W they seem to go pretty loud.

Whilst the iPhone dock is obviously a key selling point the MG-850HD  there is plenty of other connectivity on board including HDMI, VGA and  component along with both USB A and B ports for displaying from storage devices. I noticed that some other reviews have bemoaned the lack of a VGA port – I can only assume they failed to discover it hidden behind its rubber flap. To be fair it is a little confusing that the VGA and HDMI inputs are in completely different areas of the projector. Looking at the external build whilst plastic it does seem well put together with nice touches like the built in carry handle. All adjustments are manual with levelling done by adjusting the feet. I found the ratchet front foot a little awkward but not a show-stopper.

Focus and zoom are also manual but relatively easy. The Keystone adjustment was a little strange with the lever on top the projector seeming to cause wide movement and leaving the image surrounded by a white rectangular glow. I’m not generally a believer in Keystone adjustment and particularly in this case it is probably worth leaving well alone and just ensuring the projector is properly aligned.

Once focussed the image quality from an HDMI source was sharp and although perhaps not quite so detailed in colour as some of the more expensive projectors in Epson’s range, perfectly adequate for presentations and showing off the family photos. It is also great for playing movies as long as you don’t expect to play HD content on a really large screen as then the lack of 1080p becomes more obvious. It is however much better than a lot of projectors in its price-band and the fact that it uses LCD rather than the more common DLP technology avoids the latter notorious rainbow effect colour banding.  It is very bright and this is possibly at the cost of decent black levels which did seem a little washed out.

The iPhone/Pad/Pod dock works very well and is neatly tucked away at the back of the device for transit where it pops out at a light press. Docking an iPad felt very secure and connection was positive.

Once docked the MG-850HD presents a menu allowing you to access Videos, Music and Photos + More

Videos and Music allow you to explore the contents of your iOS device and play selected content from the menu using the projector’s small but more than adequate remote.

Photos and more switches to a mode where the projector becomes an external screen in iOS applications that support this feature. This includes the built in Photos and YouTube(whilst it is still part of iOS) applications. It should be noted that Screen Mirroring is not supported from the dock although you could use the HDMI port.

One nice thing is that although you do have to select the source for playback in this mode from the iPhone or iPad once playing you can use the Play/Pause forward and back buttons on the projectors remote control. This is again great for the family slide show. I did have one glitch where I had a video in amongst my pictures. The playback stopped after the Video and I had to reselect the slideshow on the iPhone.

One really unusual and convenient feature of the MG-850HD’s remote is the Coffee-Cup button. This doesn’t actually cause the projector to make a cup of coffee but does allow you to get up safely to do so. Pressing this button pauses playback and causes the projector to project a bright white screen giving adequate light to move around a darkened room.

In conclusion if you are an iOS device user and can see a use for projecting from that device then the MG-850HD is a very good option. Using it reminded me of the slide projectors I grew up gathering around and it certainly has the same sort of social interaction they invoked. Obviously the ease of use and quality is much improved from those days and the MG-850HD is a really easy and convenient way to share your memories.

It is really good reasonably low cost general purpose projector and has all the  connections you are likely to need. The built in speakers are a bonus for the uses it is likely to be put to and the display quality is amongst the best in its class. Discerning video users will appreciate the lack of rainbow effects from using LCD rather than DLP for projection.

A few minor foibles, such as the Keystone and the video slideshow irritation prevent us from giving it a general highly recommended and for non-iPad/IPhone users there are cheaper options but for iPhone/iPad users we would have no hesitation in recommending this really novel, convenient and great performing device.