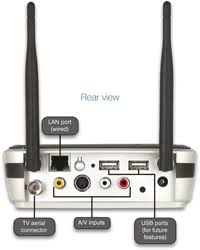 The Broadway 2T is a network DVB-T dual tuner – note only DVB-T not T2 so no Freeview-HD in the UK. Having said that as this is primarily  aimed at streaming to network devices the lack of HD playback is probably a good idea.

Setting it up is simplicity itself. You connect it to an aerial  and a network connection (initially this has to be wired) and then go to http://distan.tv. A very simple to follow setup wizard will walk you through scanning for channels and if you want to connecting the Broadway to your Wi-fi network. I have to say  I had mixed results using Wi-Fi, particularly if the viewing PC or iPad/iPhone was also connected by Wi-Fi, with quite a bit of signal breakup so I would suggest for consistent quality using a wired connection.

Once you have setup the device going to http://distan.tv will prompt you for a 4 digit security code and then show you a screen with a list of channels on the left hand side and a preview window on the right. This web pages worked on just about every device I threw at it  – both PCs and iPhones/iPads.

When I first used the device I was disappointed by a lack of program guide but Hauppauge have released a firmware update which resolves this and also adds the brilliant ability to record to a USB device plugged into the Broadway unit. Once I found a USB key it actually recognised this worked really well and was fairly intuitive. The recordings can be viewed from the same web site as the live TV.

One slight moan here. Hauppauge need to organise their download sections better. In carrying out this article I needed to download the new Firmware, a new version of their TV software and a patch to let the TV software work with the new firmware – I had to visit three sites to get all of these. Hauppauge.co.uk, Hauppauge.com and for the patch PCTVsystems.com. Now I know the latter site  is a subsidiary of Hauppauge and knew to try there and the other sites but how many users would. Note: www.PCTVsystems.com  does now have all the files in their downloads section but neither of the Hauppauge sites do.

With the new firmware you do get a pretty good set of guide data, although it can take a while to update. Picture quality on the stream is reasonable and you can improve the bit rate in settings if you have a higher quality network.

I should point out that the firmware is currently beta and I did have a couple of lockups particularly when running at high bit rates which required a reset of the Broadway.

One area that Hauppauge have been working quite hard on lately is Windows Media Center integration and the Broadway is no exception – although the support is a little hard to find!

To get the Broadway working you will need to download the latest version of TV Center (6.4 at present) – don’t worry you won’t be forced to install the complete suite. On install you will be prompted if you want to install the Media Center Drivers and as part of this you will get Broadway support. Once this is installed a little Broadway icon will appear in your tool tips and it will show any detected devices and the tuners associate with them. This applet also fools Media Center into thinking it has the Broadway tuners attached as DVB-T devices and you can go ahead and set them up like any other DVB-T tuner.

One gotcha is the aforementioned patch – without this all will appear to install correctly but you won’t get any channels found. The patch is on www.PCTVSystems.com and is called Hotfix für TVCenter Software Ver. 6.4.1 and Broadway 2T, Firmwareversion 2.5 when you can’t find it.

Once setup they have full DVB-T support including interactive and sub-titles. You can also watch one tuner on the Media Center whilst using the other on say an iPad. A big caveat here – watching two channels is a huge bandwidth drain and I found to use it in this manner I had to dial way back on the quality for the iPad app. This is also a bit of an issue if you want to use both channels in Media Center and I found if I was watching one channel and recording another i got quite a bit of breakup on the recording. Using a wired gigabit network did improve this greatly and it was then usable but something to be aware of.

With that caveat getting the Broadway into Media Center was very straightforward and I certainly enjoy the convenience of using it on a PC in another room to the aerial socket. I should note that Media Center cannot make use of the Broadway’s in built recording system and all recordings are on the local PC.

I didn’t have such luck when trying to use the Broadway with DVBLogic’s DVBlink software. Alhough DVBLink recognised the devices I just could not get it to tune any channels.

All in all I like the Broadway. It is really easy to set up, the new firmware has made it a great standalone video recorder (particularly in an iPad using  environment) and it integrates into Media Center very well. My only concern is around the Network reliability but that would apply to any device streaming  high-quality video.