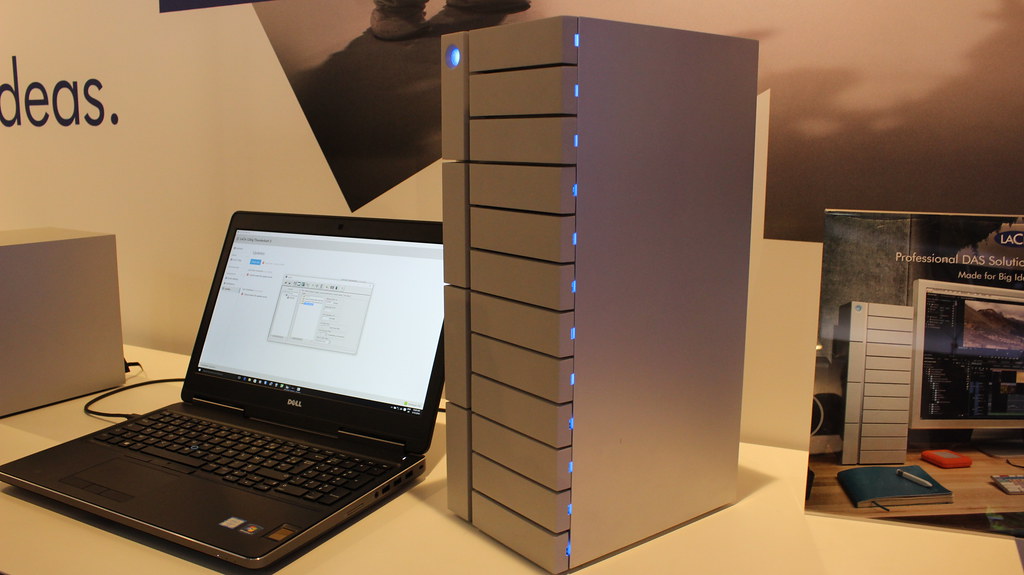 Last week I took trip to the IBC conference in Amsterdam a show for the broadcast and movie industry to show off the latest technology for movie and TV productions. What was interesting is that while multi-million dollar movie productions may be out of reach for most consumers the technology used in high end productions is working its way down to consumers for example 4K cameras are now consumer items.

There are a great deal of technical challenges when dealing with massive video files taken from 4k and 8K video cameras, the files take require massive amounts of storage and then you have to deal with backing them up, transferring them from devices to device and then actually work with the files. While at the show I learned about Intel’s Thunderbolt 3 technology and how device manufactures are using the interface to vastly improve workflow of this demanding industry.

Many laptops are now shipping with Thunderbolt 3 ports (like the Dell XPS 15), the HP Spectre 13 which I reviewed recently has abandoned legacy connections in favour of three Thunderbolt 3/USB C ports on. I should point out that while I will be looking at the issues raised at IBC they apply to anyone working with large amounts of data and wanting simple connectivity solutions.

First background some background on Thunderbolt 3. Thunderbolt 3 is a solution from Intel that combines a number technologies into a simple USB Type C connector. It supports 40 Gbps transfer speeds, so it can deliver 2 x 4k videos streams, 10 Gbe Ethernet, USB 3.1 and device power over a single USB type C connector. In other words one connector to rule them all.

Due to its versatile nature Thunderbolt 3 can be used in a number of situations. It can used to as a single cable docking solution from a laptop, connecting up 4k monitors, connecting to external graphics cards and networking. Plus you can have any combinations of these scenarios.

In my series of articles and videos on Thunderbolt 3 I am going to be looking at:

While at the show I recorded video interviews with many of the manufactures showing off Thunderbolt 3 devices as well as talking to the likes of HP and Blackmagic about how they are using Thunderbolt 3.

First I chatted with Adobe who explained how Thunderbolt 3 is enabling video editors to be able to work and edit large video projects. Due to the fast transfer speeds of Thunderbolt 3 large video files can be directly edited on the external storage device without the need to copy the files over to a PC or Mac first which means you don’t need a laptop or PC with massive storage on it, you just need a Thunderbolt 3 port.

Adobe said many video editors are using large LG 34 inch ultra wide displays connected up to a laptop via Thunderbolt 3 and then daisy changing additional devices like another 4k monitor or storage devices. Another common use was using a 10 Gbe Ethernet Thunderbolt 3 adapter to provide high speed networking. In my follow up articles I talk to some of the manufactures making Thunderbolt 3 storage devices, networking kit and peripherals.

In this video Adobe explain how they use the Thunderbolt 3 to replace much of the big heavy kit that they used to need for video editing and how simple it is to get it all to work together.

In this video Panasonic talk about their new media drive for transferring 4k video recordings from their high end media cameras to a PC for editing or backup. Previously a 256GB media card would take about 30 minutes to copy to a PC but with Thunderbolt 3 and their new drive it takes 8 minutes so it much faster to get started editing the video plus you can transfer two cards at once. When you’re dealing with terabytes of data the time saved is massive. This technology is making its way down to consumers, Panasonic have 4k consumer camera already and they say future Panasonic consumer products could feature Thunderbolt 3.

Thanks to Intel for helping me with the logistics getting to IBC. You can find out more about Thunderbolt at thunderbolttechnology.net