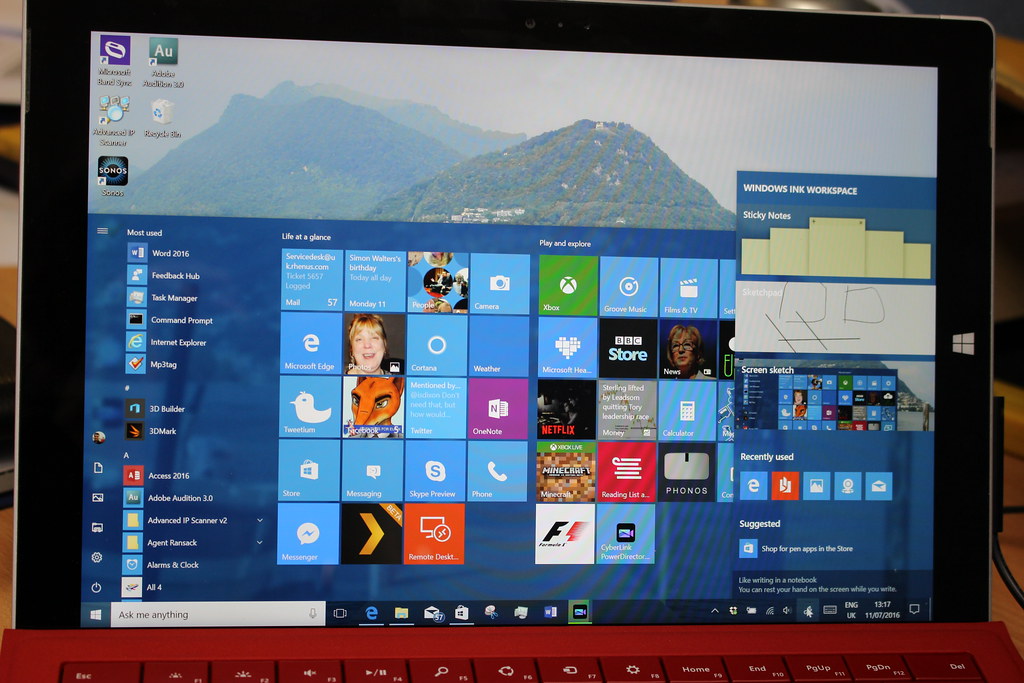 Next Tuesday (August 2nd) Microsoft release a big update for Windows 10 and Windows 10 Mobile which Microsoft have called the Windows 10 Anniversary Update. During the development cycle it was codenamed Redstone and there are a lot of changes to the OS that really make a big difference to Windows. Here is my guide to watch has changes complete with a video guide.

The Start experience has had some helpfully changes making things easier to find and navigate around. Tablet mode and desktop mode have both changed. In desktop mode you no longer need to click the All Apps button, the list of installed apps is now built into the start menu, Microsoft have done this by removing some of the text labels with a menu button to bring them in if you want them. In tablet mode there is now more space for the tiles as the all apps list now fills the screen making it easy to find the app. You can add folder to the start menu like Music and Pictures, so its fast to quickly jump to a folder.

Overall the changes to the start menu make launching apps much faster and it is easier to find apps you want. Another nice touch is the taskbar clock now shows your events when you click on it.

Action Center and notifications a nice set of improvements. Notifications now can have large images attached to them so they really standout and in Action Center you can set up notification priorities by apps. So you can pick the order apps place notification events, so for example you can have Email always go to the top of Action Center with Facebook next and have Cortana always be above both of them. Also apps can have a badge showing notification counts, so apps like Tweatium and mail display a count or unread notifications in the task bar.

With Cortana you have notifications from your Windows 10 Mobile device or an Android phone pushed to Windows 10 PC, you can even reply to some notification from Windows 10 which then send via the phone. I test it with Gmail and text messages and it worked really well. Unfortunately Cortana on Android is US only so you if your not in the US you can’t get the app from the Google Play Store, I installed it via an APK file.

Another new feature is Windows Ink. This is a section specifically designed for the devices with digital pens like the Surface Pro range. The nice thing about Windows Ink is that you can launch it via the top button on the Surface Pen and it brings up apps design for the Pen such as new version of Sticky Notes which you can use with the pen to take notes. If you are in the US the app will recognise dates and turn them into reminders. There is also Screen Sketch which enables you to draw and write on the screen and there is even an on screen ruler for helping draw straight lines. You can then share screens via apps like email, twitter etc. Plus there are shortcuts to recent apps.

There are a lot of changes within Microsoft Edge and the most noticeable change is with Extensions. Extensions add functionality to the browser such as adblocking or translations, there is a special section in the Windows Store for extensions. At the time of writing there are extensions for Evernote, OneNote, Reddit, Pinterest, Pocket, Microsoft Translator, Microsoft Office and LastPass. Microsoft say that Google Chrome extensions should be easy to port over to Edge so we should seem more extensions soon. I have Translator installed and when I go to a web page not in English an icon displays in the Microsoft Edge which clicking on translate the page to English. Adblock blocks most ads on web pages and has the option of showing how many ads have been blocked.

Some other changes to Microsoft Edge include swipe navigation between pages (swiping left to right on the lefthand sie of the screen makes Edge go back to the previous page. Also added are web notifications so that web sites can push notifications to Action Center (like Skype for the web) and Edge also now supports Windows Hello for logging into web pages. As with the rest the Windows update there a lot of minor changes that add up to a better experience.

The Windows Store has been overhauled with a cleaned up look. When you go to the update page it now shows recently updated apps so if you have automatic updates switched on you can see which apps have been updated (It also pushes a notification to Action Center). When you view an app you get a lot more information about the app that you did before.The store also now shows you what platforms it will run on along with system requirements (like the version of Windows that is supported).

There is also a section just for Microsoft Edge Extensions.

With Cortana you can now create reminders by sharing items from Windows. So could share a web page and ask Cortana to remind you to look at a page and read it later or share a document to work on when you get home. Cortana will also notify you when your phone’s battery is running low or if you have a missed call. It also is the underlying system that links phone to PC notifications as described in the Notification section.

Also with this update Cortana is now on the locked screen where you can ask Cortana to do things like play your music or set a reminder without having to unlock your PC.

A new app in Windows 10 is Connect which is a Miracast receiver. This means you can beam your phone or another PCs screen to a Windows 10 PC. For most devices the app shows a mirror of the phones screen or a mirror on the PC screen but if you have a Continuum supported phone (like the Lumia 950 XL) you have a separate display so you can run apps on your phone and use the PC as a 2nd display at the same time.

Microsoft have brought Linux’s Bash Shell to Windows so you can use Bash commands with the OS, command line LS and NANO work from the Bash prompt and if you are a Linux user this is an important addition to the OS.

Other changes include a more polished settings section with new icons, there is a system wide Light or Dark mode, new emojis and support for containers in Hyper-V, new icons and over all a more polished UI.

The Windows 10 Anniversary Update is a really nice improvement for Windows 10 and while the changes aren’t so big that it will confuse users there are plenty of changes that really improve Windows 10. There have been so many subtle changes to the OS since Microsoft first released the preview builds there will be many I have missed, let me know if I should add any.

In this video I run through the changes to the OS and highlight some of the changes. You can look back at our YouTube channel at the various Windows 10 builds right back to the first previews.

1 thought on “What is new in with the Windows 10 Anniversary Update? (with video)”