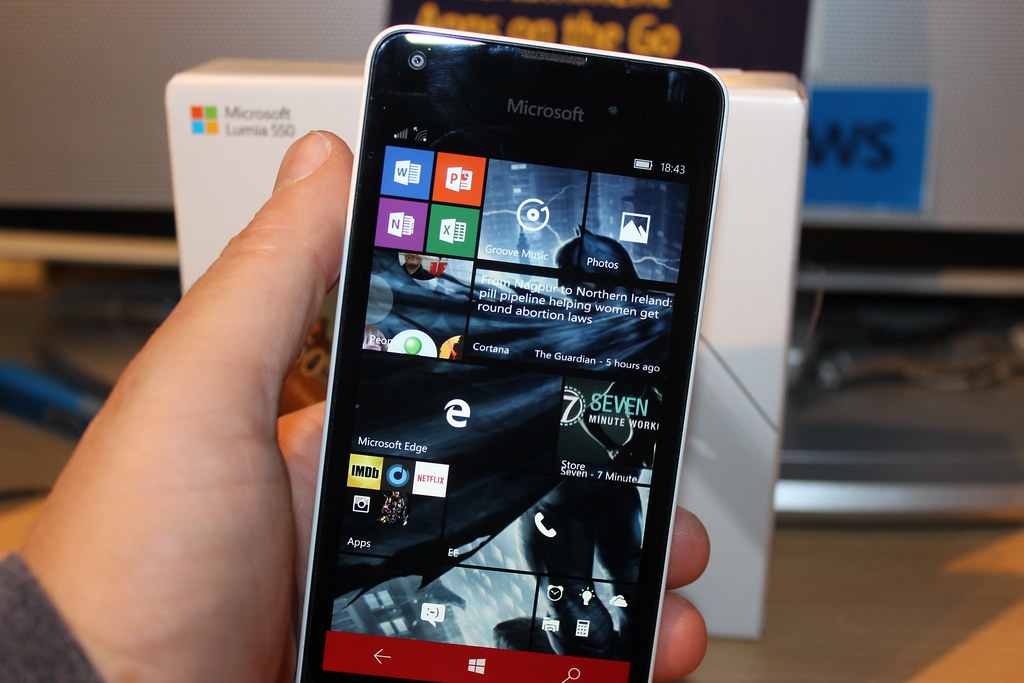 Last year when Microsoft announced the new flagship 950 and 950 XL phones they very quietly announced a budget Lumia 550 phone. The Lumia 550 is the first budget phone from Microsoft that ships with Windows 10 Mobile and costs £99 SIM unlocked. The Lumia 550 I am reviewing is actually my 13 year old sons, he replaced this old Lumia 625 with this own money.

The design very much like the 640, it has a removable glossy plastic back which exposes a removable battery, Nano-SIM slot and Micro-SD card slot. It is a little thicker than the 640 or the new 950 and 950 XL. But despite its budget price it doesn’t feel cheap and it feels well made. There are volume control and power button but no dedicated camera button. 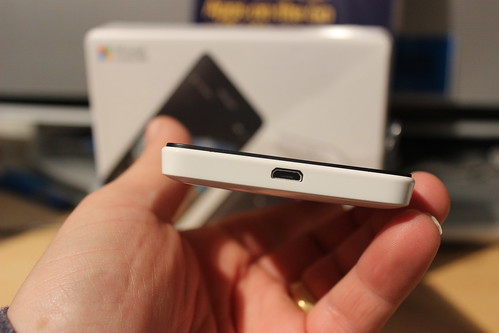 Let’s take a look at the specs: It has a Quad-core Qualcomm Snapdragon 210 processor which is by no means the fastest processor but as with previous generation of OS Windows 10 Mobile is very efficient and works very well with the 210 processor. Which all means the 550 is nice and fast with no lag switching apps, browsing the web or playing Minecraft. I think the 1GB of RAM helps with app performance, my test phone is a 635 which only has 512GB on board memory which slows when you load multiple apps but that doesn’t happen on the 550. Taking of memory the phone has 8GB of storage which isn’t very much but you can expand it with a micro-sd card, my son purchased a 32GB card for around £10 and set up Windows to store photos, apps and music on the card so 8GB isn’t really an issue.

The 550 has a 4.7 inch screen running 1280 x 720 and is very clear, bright and sharp. The display has a wide viewing angle and works well outdoors, the screen is one of highlights of the phone. One nice feature that has made its way down from the more costly Windows Phones is Lumia Glance, this displays the notification info on the screen while the phone is off so when you move the phone it shows you the date, time, calendar appointments and notifications counts. It saves you from having to unlock the phone to see if you have new emails or text messages. It doesn’t support double tap to wake which is a shame but neither does the new 950 / 950 XL. 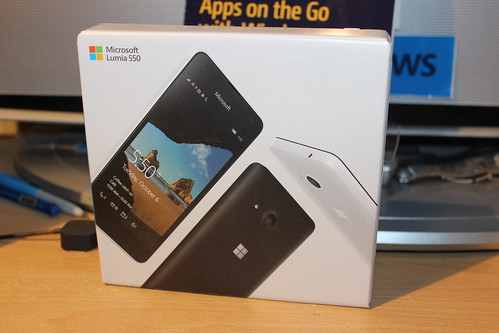 Another great feature of the phone is the battery life. From a full charge the phone is reporting over 2 days of battery left even using it for browsing and listening to music (it has is a 2100mAh battery), my son charges it up every other day something.

The camera spec is a little disappointing, the rear camera is just 5MP and the front is 2MP. Having said that the pictures come out surprising well with a nice and clear image, it has a single LED flash for use at night or in low light. The front camera is fine for Skype calls or taking selfies and videos record at 30fps at 720p. There is a single speaker on the rear of the phone which has plenty of volume. It supports LTE/4G and Bluetooth 4.1, FM radio and GPS and in the box you get a USB charger (non-detachable Micro-USB). 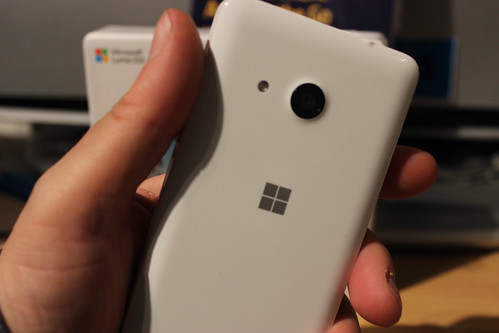 As of the time of writing the only the Lumia 550, 950 and 950 XL come with Windows 10 Mobile and I have found that Windows 10 pre-installed seems to work better than upgrades from Windows Phone 8. I am a fan of Windows 10 and love it on a phone. I am not going to talk about app gaps or try and compare it to Android, if you have Android apps you need then this phone isn’t for you but it does have the apps my son wants and Microsoft’s strategy of universal apps is slowly starting to pay off. Windows 10 Mobile’s built in apps are an improvement over Windows Phone 8, the mail app has developed into a great app as has Groove Music and the photos apps. The phone comes with the mobile version of Excel, Word, Powerpoint and Onenote which a great for reading or editing documents on the go, currently you don’t need an Office 365 subscription to edit documents. Plus there are some great universal apps for Windows 10 like Plex, Tunein Radio and the BBC Store.

Overall the Lumia 550 is a very nice little budget phone and my 13 year old son is very happy with it. It is also a great phone if you want to dabble with Windows 10 Mobile, at £99 SIM unlocked it is great value. There are some drawbacks like the low spec camera and no support for Continuum but it’s a great Windows 10 Mobile device for the price.
Here is my hands on with the Lumia 550. Thanks to my son Jack for the use of his phone.