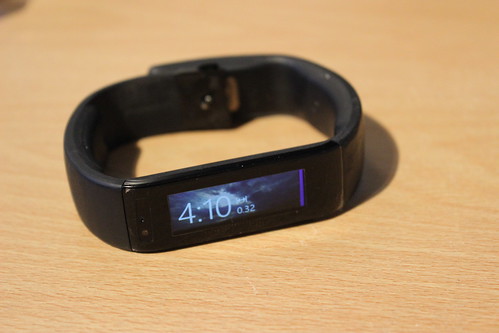 I have had my Microsoft Band since November and wear it all the time so I thought it was about time I put down my experiences of the Microsoft’s device (for my video review see the video at the end of the post).

Once you do manage to find the Band in stock you three size options to pick from (small, medium and large). Microsoft have a paper cutout you can use to workout which size you need but I found it not that helpful. So I got the large Band airing on the side of caution but actually I should have gone for the medium sized one as the Band needs to be tight on your wrist for the sensors to get an accurate reading. So the large size is just about ok for me but it’s on the smallest setting. While talking about the design I should mention that the bezel around the screen gets marked very easily so you are going to want to use a screen protector (I used one from skinomi). 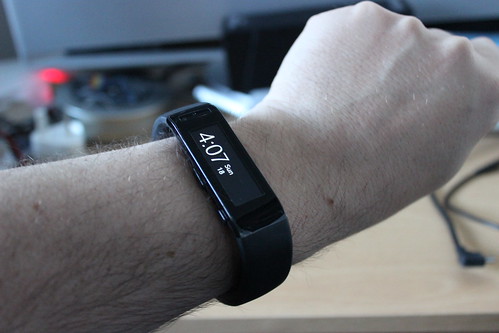 Microsoft say you should get two days between charges of the Band. In practice I found that using the Band for notifications and alerts I could get just about two days, what I actually do is charge it once a day while I am sat my desk in the morning. It is normally around 60% when I put it on charge and it takes about 20 minutes to get up to 80% and then half an hour to get to 100%. You could easily get away with small changes keeping it topped op. If you use GPS tracking when using the run it takes more battery, so you would have to change it more often. I use watch mode on the Band which keeps the display on with the time on it which is great as I use it as a watch, it does take a bit of the battery but it hasn’t caused me any issues. It would be nice if it had the option of having the display off until you lift your arm up to view it and then it could switch on which would reduce the battery drain.

Once you have a you will need one of the mobile apps, there are apps for iOS, Android and Windows Phone. If you are not in the US you need to switch regions on your phone to US to get the app, on Windows Phone that is pretty easy and you and switch back after installing it but on iOS and Android I don’t think it is so simple. For my Nexus 5 I download the Microsoft Health app APK rather than switching regions.

So once you have the Microsoft Band on what is it like to wear? At first it does feel a little bulky but after wearing it for a couple of hours you get used to it and soon forget about it. I wear mine all pretty much all the time (keeping it away from water) including sleeping and I find it pretty comfortable. 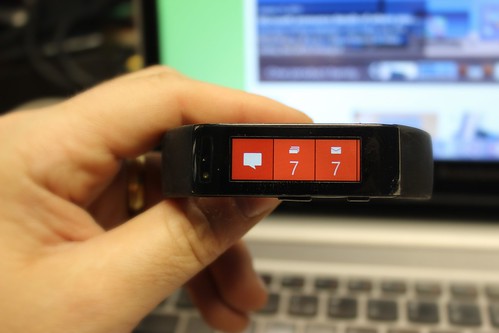 The notification are great but you can only interact with a few of them, most just have a dismiss option and that doesn’t clear them from the phone. So if you get a Twitter notification and dismiss it on the Band it doesn’t clear it from the phone. It’s not a major issue but it would be good if Microsoft could add this. There are some notifications you can interact with, when you get a phone call you can reject the call and send a pre-set message back to the caller. The same goes for text message, you can reply back with a pre-set message (which can be configured via the phone app) and I do find that very handy.

If you have Windows Phone you get Cortana on the Microsoft Band, you can hold down the action button and then the Band listens for a command. You can do things like “how long will it take me to get home” and it uses the phone to get the info and passes it back to the Band. You can also use it to trigger things on the phone, like music playback. If you pin Cortana to the start screen on your phone you get news alerts on thee Cortana app on the Band.

The Microsoft Band is a health devices and it has a number of heath features. It has Exercise trackers, guided workouts and a run tracker. It continuously tracks your steps and heart rate so without enabling anything it will give you daily step count and a graph of your heart rate. I found the step count very accurate and that is probably because it calibrates when you use the Run app with GPS. The run tracker uses GPS and monitors your progress so it can track your heart rate, speed and elevation. When you get back from your run or work it gives you stats about your run which I really like, you can’t export the data from the Microsoft app and I would like to see that added. For guides workouts you can pick a plan from your phone and then it gives you step by step instructions on the Band, I haven’t really used this that much but it is an interesting feature. Microsoft are adding new plans to the app soon.

The other thing I really like is the sleep tracker, you tell the Band you are going to sleep and then it turns off the display, blocks notifications and then monitors your sleep. When you get up in the morning you get a chart showing how well you slept, it shows how long it took you to get to sleep and if you were in a deep sleep. I found the information fascinating and I can see that if you having sleep issues the app maybe to help you work out why.

Also since the launch there have been a number of 3rd party apps that enhance the Bands features. There is Pimp my Band which enables you to customise the background images and colours on the Band, something you can’t do from the Microsoft app. There is Band Sensor Monitor that gives you real time access to the sensors, some which are not available from the app. Another app is a desktop app that enables you to export Band data (UnBand). Speaking of desktop apps Microsoft also have a desktop app which you can use to update the Band. 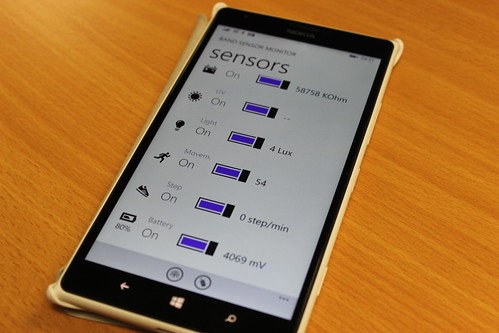 So after two months I still love my Band and I feel lost without it on. I love the notification features, the sleep tracking and run tracking. However there is still a lot Microsoft need to do, the apps are basic and don’t have any exporting features or access to many of the sensors that the Band has. Also there is no web view for all the data it has collected (but Microsoft have said that is coming).

Also there are should be alerts built into the app, things like if you have been sat down to long it should let you know so you can get up or if your temperature is getting to high it could alert you. It collects a massive amount of data which it could then use to help you but currently it doesn’t do anything like that.

So Microsoft have still a lot to do, not at least make the Microsoft Band available outside the US.