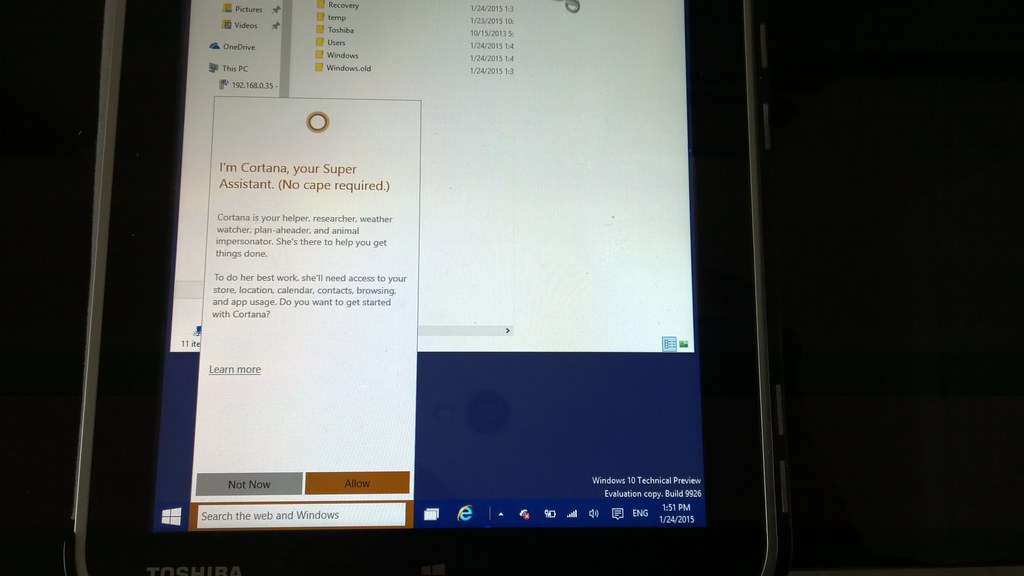 Back in October Microsoft release a technical preview of Windows 10 and the first release was aimed at showing off the desktop features of the OS. On Friday a new build was made available and this build has some of the consumer and tablet features that will be included in the final OS. I thought I would get it installed on a tablet so I picked on my Encore 8 which is just over a year old and had Windows 8.1 on it. First off I should say installing was no easy task an I should also say that the Encore’s install of Windows 8.1 isn’t a compressed image of Windows (WIMboot) as some of the new tablets are and I wouldn’t try and install Windows 10 on this type of install at the moment.

Installing Windows 10 on an Encore 8

First I tried to install Windows 10 via the download on insder.windows.com, it told me to have 4GB of free space so I removed some apps and continued. Then via Windows Update it downloaded the OS, it which is around 2.2GB of data. After downloading the setup data it tried to do the install and it then asked for 8GB of space which took me some time to recover. I had to move the swap file to an SD card and remove all of my apps to free that amount of space from the 32GB drive. So it set off again but then it came up saying “Modern Setup Host has stopped working”. I tried it once more and off it went and downloaded the 2.2GB again and then failed with the same error. I think the error is to with space and so I downloaded the ISO for Windows 10 as I had a feeling I would have more luck with it. 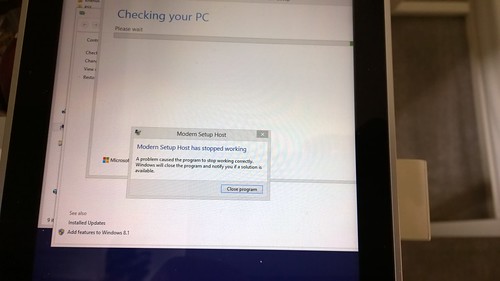 I copied the ISO file to the SD card mounted on the Encore and then double clicked on the ISO file, it mounted the image and then I ran setup. Again it asked for 8GB of space which I now had and asked if I wanted to do an upgrade which I did and off it set. After a couple of reboots later it had an error and restored the previous version, so back to Windows 8.1 and I opted for a clean install which did the trick. So after may tries and a few hours I had a clean install of Windows 10 on my tablet.

First you notice the new look of the taskbar which has a much flatter look than the previous build which I actually like. The main change since the old build is the new Action Center replacing the Charms Bar. Action center looks like its Windows Phone counterpart and has buttons for tablet mode, display settings, connect (for things Bluetooth and Miracast) and all settings. The is also a little expand button that shows other buttons like Airplane mode and Rotation Lock. You can customise which of these is in the first four via the settings options. Notification are shown in this bar, you can click on a notification and it will take you to the relevant app or swipe away to dismiss them.

For tablets there is a new full screen mode which gives you full screen everywhere. All apps are full screen and you can’t get to the desktop. Even traditional Windows programs are full screen. When you are in tablet mode the start screen is full screen and the task bar doesn’t show any running apps plus the on screen keyboard automatic displays when you enter a text box (if you are not in Tablet mode you have to press the on-screen keyboard icon). I suspect on a 7 inch tablet there will be no way to switch off tablet mode and therefor have no access to the desktop but you can still install traditional Win32 apps. I have to say I don’t really like the new Start Menu, it looks strange especially in full screen mode, I would rather have the Windows 8.1 style start menu on a tablet but Microsoft say this isn’t the finished article yet. You can also close any app by swiping down from the top in tablet mode. Microsoft have done a good job making modern apps and traditional work the same way, swiping in from the right brings up all the running tasks and again there is no distinction between modern and traditional apps. 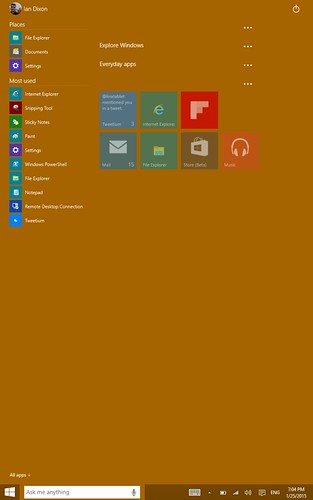 By switching my region to US English Cortana showed up which works like it does on Windows Phone, you can say “Play my music” and it will shuffle your music via the default music player which in my case was Windows Media Player. You can also set it up for always listening so you can say  “Hey Cortana” and then interact via speech. Cortana was a bit hit and miss in my testing but it is early days yet. 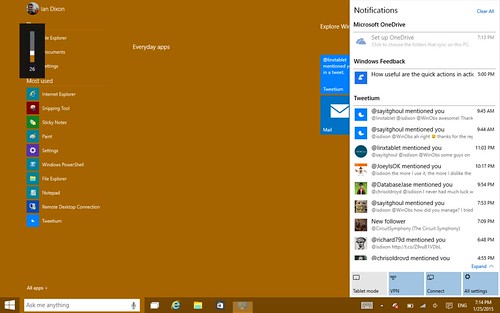 The new settings app which replaces the old Control Panel is a massive improvement for tablet users, settings are group together like the old control panel and selecting a group takes you to a Windows 8.1 style setting. I am pretty glad to see the back of the old control panel, it doesn’t belong in a modern OS.

I am really looking forward to try the new browser (Spartan) and the new media apps, in this build the OneNote and Maps apps are the ones shown off in the keynote and the other are not available yet. So far this build show signs that Windows 10 is going to work very well on an eight inch tablet and devices of any size.

[Updated] I have had some more time with Windows 10 on the Encore and noticed a few more things. I said before that I didn’t like the new start menu, I still don’t but pinning the apps and change the size to large makes the items look better and work better on a small tablet. As the Most Used app list files up it seems odd that you can’t swipe up to bring up the All Apps list.

I also found that swiping down on a modern app gives you the setting option that you used to get from the charms menu. It is not as elegant as the Windows 8.1 way of working. Another feature I found is you can place apps side by side by dragging down from the top to the left or right of the screen and then you can have apps side by side.

Here is a video showing some of the new things in build 9926 of Windows 10 running on my Encore 8 tablet.