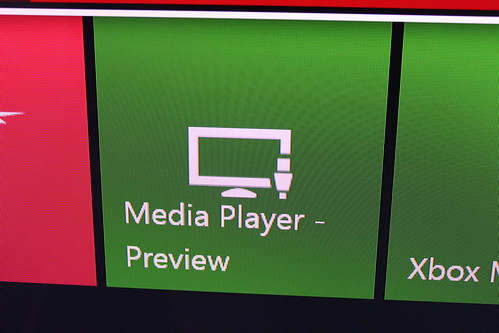 Microsoft have released details of the changes coming to the Xbox One this October. The changes which are available today for preview users include updates to the TV and Video features of the console.

The Media Player Preview app which was released last month will now stream music, pictures and video stored on a DLNA server. So it should be possible to stream movies and music from a media server on your home network to the Xbox One something I wanted from day one, I imagine it’s also possible to stream live TV from an HDHomerun or DVBLink server to the Xbox One so it’s going to be interesting to try that out.

Also in the update is support for playing MKV files in the media app stored on a USB drive or on a DLNA server. There is support for the Xbox One Digital TV Tuner due later this month and live TV streaming to SmartGlass. Other changes include Live TV Trending in a tab on OneGuide, snap mode updates and TV Miniguide.

I am going to be trying out the Media Player app and see what you can do with it now it has network support.

Details on the changes from Microsoft:

New Snap and Friends functions – Stay in the game and in touch with your friends at the same time with improved Snap, SmartGlass and Achievements functions.

Snap Updates – We’ve updated the Snap Center to include quick access to many of the things our fans wanted faster access to when playing a game – Friends, Messages, Game DVR, clock, and battery indicator – as well as making it easier to close and open new snap apps when playing a game. A double tap of the Xbox button on your controller will bring up a menu that allows you to open a new app in snap mode, close the current snapped app, or switch focus between your game and your running snapped app. Additionally, two apps have been optimized for Snap mode:

Messages Snap App – You’ll be able to open, read and respond to messages in Snap mode, and messages will now be displayed in a threaded conversation view.

Achievements App – Updated to enable sharing of achievements you’ve unlocked with captions, see a list of friends who have unlocked specific achievements, and an updated achievements Snap landing page that that shows Achievements on recently played games, when a user is not actively playing a game.

Friends section – The new Friends section enables you to see at a glance what’s going on with your friends. You can stay up-to-date with their current activities, the most popular games your friends are playing, and a Gamerscore leaderboard to see who has improved their Gamerscore over the last 30 days. The new Friends section has been available for select preview members for a few weeks and now we’re bringing it to everyone in the program, with plans to roll out this feature for all Xbox One owners with the October system update.

Improvements for TV and video – We’re excited to roll out updates that will make your viewing experience better than ever on Xbox One, whether you want to watch TV or use SmartGlass as a universal remote.

Media Player DLNA and MKV support – Members of the preview program who have also downloaded the latest version of the Media Player app will now have support for DLNA streaming. With this update, you will be able to easily access and play music, watch photo slideshows or movies stored on home media servers and devices that support the DLNA server protocols. Additionally, you will now be able to playback MKV files stored on a USB device or a device on your home network that supports DLNA streaming.

Live TV Trending – Within the next week, you will be able to see what Live TV is trending based on your country and OneGuide settings.  A new tab will be available in OneGuide that displays the top 10 most watched TV shows, with the list filtered down to the shows that are currently available to you based on your OneGuide settings.  You will be able to tune to a specific show by pressing the A button. The Live TV Trending list will be updated approximately every minute, so you can easily discover shows that are popular with other viewers.  This feature will initially be made available to preview users in the U.S., Canada and the UK.

Xbox One Digital TV Tuner – Previously announced in August, this new accessory will be available for purchase in UK, France, Germany, Italy and Spain on October 21.  This USB-attached TV Tuner will enable users to watch TV on Xbox One, and pause Live TV for up to 30 minutes.  There are a limited number of preview participants in this program due to hardware requirements needed for testing.

Stream TV to SmartGlass – If you have an Xbox One Digital TV Tuner, you will be able to stream TV across your home network to your smartphone or tablet using the Xbox SmartGlass app. You can also pause, play, rewind and change channels, without interrupting gameplay.

Live TV MiniGuide – For markets where OneGuide is available, a new MiniGuide on the bottom of the screen will display details about the TV content that is currently playing. You can quickly change channels, see what’s on other channels, and tune to the previous channel or other recent channels.

OneGuide in 12 new countries – Live TV listings and schedules will be made available to preview members on Xbox One and SmartGlass for Belgium, Chile, Columbia, Denmark, Finland, Netherlands, Norway, Portugal, Poland, Sweden, Switzerland and Russia in the next few days.

Internet TV Apps – Apps with live TV channels can now include their TV listings within OneGuide.  In addition, other Xbox TV features such as channel changing using speech and Miniguide will work with these apps. These features are enabled automatically the first time you sign into a supported app. The first app to support this feature in preview will be Zattoo, a TV provider available in several European markets. We will be sharing more details soon with members of the public preview.

Universal Remote Control in SmartGlass – If you are in one of those 12 countries, you will also be able use your mobile device to control your Xbox, TV, and/or Cable/Satellite box.

Other fan-requested features – We are also excited to roll out a few other cool features this month:

Updated Devices & Accessories page – To access the new page, go inside Settings, where you can Find, Assign, and Update Xbox One accessories.  You can now more easily “assign” accessories to specific users, such as assigning a headset to a specific gamer.

Firmware updates – You can update the firmware for an individual device. And, you can also more easily find (or identify) a controller by making it vibrate.

Hide Games & Apps on your console – You can now hide items in the “Ready to install” list under My Games & Apps. This is a per-console setting and items will reappear in the list if they are installed again from the Xbox Store. To access the shortcut to temporarily show “hidden” items, press X while holding down both triggers and it will show all hidden items until you exit My Games & Apps.