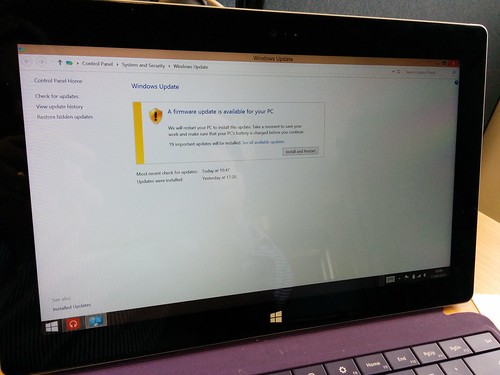 Each month Microsoft have been releasing firmware updates for its Surface devices and this month it’s just Surface Pro 3 owners that get the updates. The Surface Pro 3 gets a UEFI update that improves system stability including WiFi. The controller firmware has been updated and fixes the issue with a thermostat icon being displayed when the tablet reboots. There is also improved reliability with the Surface cover, Surface Integration driver update that improves Wi-Fi stability and there is a Wi-Fi and Bluetooth driver update that improves the Wi-Fi and Bluetooth reliability which seems something of a theme to this update. Wi-Fi issues have been causing new Surface Pro 3 owners a bit of a headache and this isn’t the first update to try and address that issues.

The updates will be downloaded via Windows Update, there are no updates for the Surface, Surface 2, Surface Pro and Surface Pro 2

The following updates will be listed as “System Firmware Update – 9/9/2014” when you view your update history.

When Surface updates are provided via the Windows Update service, they are delivered in stages to Surface customers. As a result, not every Surface will receive the update at the same time, but the update will be delivered to all devices. If you have not received the update then please manually check Windows Update later.