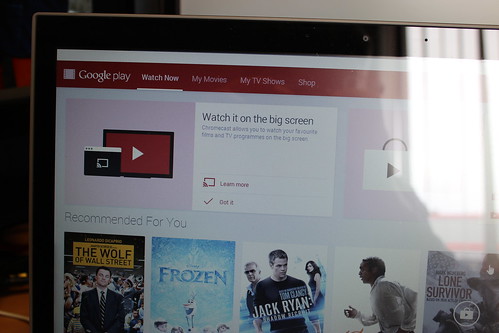 Google have finally released a Google Play Movies & TV app for Chrome. The app works on the Chrome browser as well as Chrome OS and on Google’s OS you get offline playback so you can watch movies and TV shows offline on a Chromebook. With the app you can also manage your libraries, send them to a HDTV via Chromecast.

The app works very well, you can browse your collection of videos and watch them in the browser. Sending videos to a Chromecast worked very smoothly as well. Hopefully the offline playback features can be added to the Windows and Mac versions of the app as well. The app can be found in the Chrome Store.

Watch your favorite movies and shows on your Chrome OS device, or any Chrome browser.

– Buy or rent your favorite movies and shows and watch them anywhere, anytime on your Chrome OS device, even when you’re offline.

– Manage your movies and TV show libraries effortlessly across all your devices, including Chrome OS, the Chrome browser on Windows, Mac, and Linux, and also on supported Android and iOS phones and tablets using the Play Movies & TV app.

– Watch them in HD on the big screen of any HDTV using Chromecast.

– On Chrome OS, download them to watch anytime, even when you’re not connected.

Note: TV shows are currently available in the United States, Japan, United Kingdom, Australia, and Canada. Videos may be downloaded for offline playback on Chrome OS only.