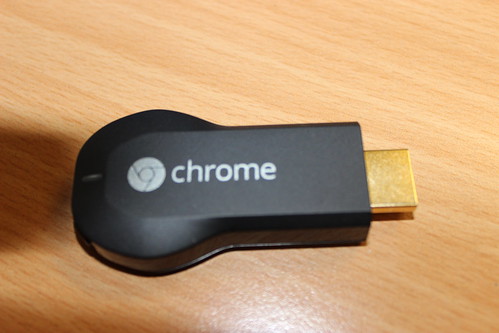 Google’s Chromecast dongle may have been out in the US for a while but it’s only just made it here to the UK. The £30 device plugs into a HDMI port on your TV and takes power from either the TVs USB port or the supplied power adapter.

Once you connect up the device to your TV you need to get it setup, I set up mine via a Chromecast app on my Android phone and the process is very simple. The Android app detects the Chomecast dongle and then it asks for your WiFi key which I entered into the app. The device then downloaded an updated and rebooted, it is a very simple setup and you can also use the Chrome browser or an iOS Chromecast app to complete the setup. 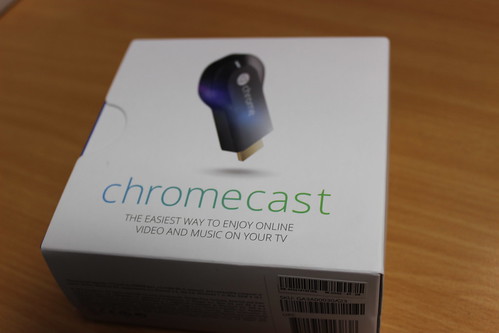 One its setup apps like Google Play Music and Google Play Video music show a Chromecast icon which you can select to send the content to the Chromecast device. Unlike AirPlay it doesn’t actually send the content from the Android device to the Chromecast device, it actually instructs the device what content to play. So from my Nexus I can pick a song and it tells Chromecast to play it, you can then turn off the phone or do something else with it. The same thing works for Google Play Video and the YouTube app. You can still control the playback from the Android device via the app or via the lock screen, the volume controls work and you can play or pause playback. 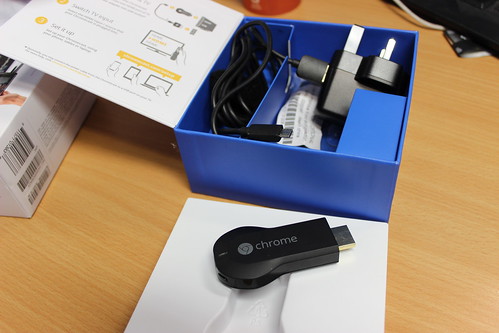 It’s not just Google’s apps that work with Chromecast. The Android and iOS BBC iPlayer apps support Chromecast so you can play a TV show on the app and then send it to the Chromecast device plugged into the TV, it’s very simple and works very well. Just as with Google’s own apps you can control playback or do something else with the phone.

Other apps include Netflix, Red Bull TV, Vevo and Plex. There are plenty of Android apps that support Chromecasting, for example BubbleUPnP will stream content stored on a DLNA server to Chromecast bridging the DLNA and Chromecast worlds.

It’s not just mobile apps either, you can install a Chomecast addin for the Chrome browser that enables you to send web pages to the Chromecast. So you could browse a site on a Chrome browser and sent the page to the TV or if your browsing the web and the page has an embedded YouTube video you can send just the video to Chromecast. It works very well, it is a little show rendering web pages s but it works.

For £30 it turns any TV in to a receiver for Chrome and Android apps, even though my Smart TV has apps like YouTube on it I found it easier to use my phone to locate videos and then sent them to the TV. Much easier than browsing YouTube or iPlayer with the TV’s remote. Chromecast is a simple device and the apps work very well, I imagine more apps will add Chromecast support in the future. If you have a Smart TV or Roku box connected to your TV you may not need the device but it does make your TV play well with Android and Chrome.

In this video I unbox the device, set it up and then try it out with Google Play Music, Video, YouTube and BBC iPlayer.

1 thought on “Video: Setting up and playing with Google’s Chromecast”