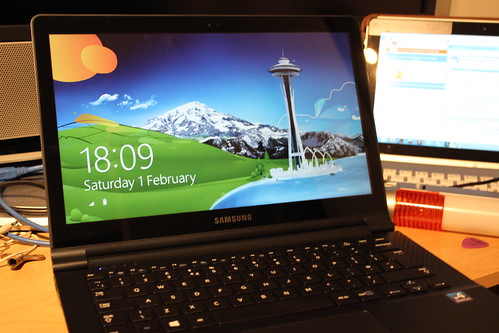 Samsung ATIV Book 9 Lite is a budget makeover of Samsung’s high-end Series 9 Ultabook. The original Series 9 is one of the best Ultrabooks around but it came with a premium price tag, the Lite version is a cut down lower priced version of the Ultrabook.

The Lite is version is a 13.3 inch Windows 8 Notebook with multi-touch for around £500. It drops metal for a plastic lid and the notebook is thicker than an Ultrabook which is mainly down to the screen/cover (probably the touch screen). The base is actually pretty thin, there is no VGA or Ethernet port which keeps the thickness down but there are USB 3 ports, MicroHDMI and a small port for the included Ethernet adapter in case you need a LAN port. It weighs just over 1.5KG which feels heavy after using a Surface 2 but for a full size notebook is a good weight. 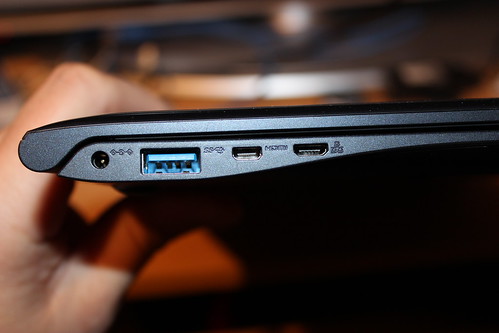 The keyboard is the typical island type design and does the job, the keys are well spaced out but there is no number pad. The trackpad supports Windows edge gestures and two finger scrolling, just like the keyboard does the job reasonably well. 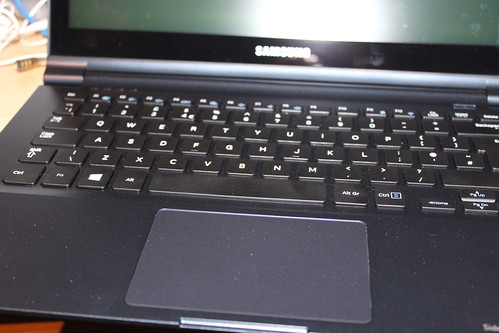 Where you can tell it’s a budget machine is with its processor. On the notebook there is a sticker saying it’s a quad core, but it doesn’t identify what kind of processor it actually is. In Windows it describes it as a Samsung processor but it’s actually a rebranded AMD A6. The quad core A6 runs at 1GHz and can step up to 1.4GHz when needed. It certainly not an i5 processor but its ok for Office, browsing and anything from the Windows Store. I tried 3DMark from the Windows Store and its score of 14628 puts it almost the same as an ARM powered Surface 2 and well below an Atom powered Toshiba Encore 8. I don’t think you will want to do video editing or 3D gaming on it. 4GB RAM means Windows is very responsive. Battery life seems to be just below the 5 hours mark for general use which is pretty acceptable for a budget device. 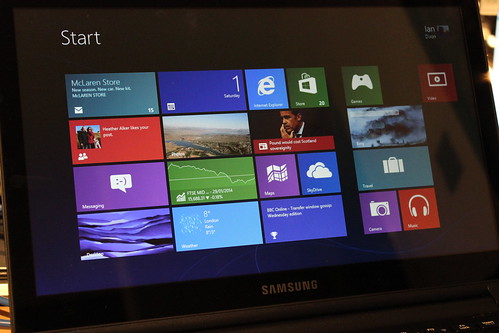 The screen is one area affected by the budget spec, it runs 1366×768 and is very reflective. The resolution is ok for Windows, it does the job but it’s a little on grainy side. One good point is the touch screen, it is very responsive. Where the notebook does perform well is with the SSD drive, it comes with a 128GB SSD drive that makes it fast to start up and is probably one of the reason why Windows feels snappy.

My review unit shipped with Windows 8 and not Windows 8.1, which isn’t too much of a problem as the 8.1 update is free from the Windows Store. So for £500 you get a reasonable device in a lightweight package. It’s is not an Ultrabook but you are not paying an Ultrabook price. Overall Windows 8 works well on it but it is let down by its processor.

In this video I take a look at the ATIV Book 9 Lite and see how it performs.