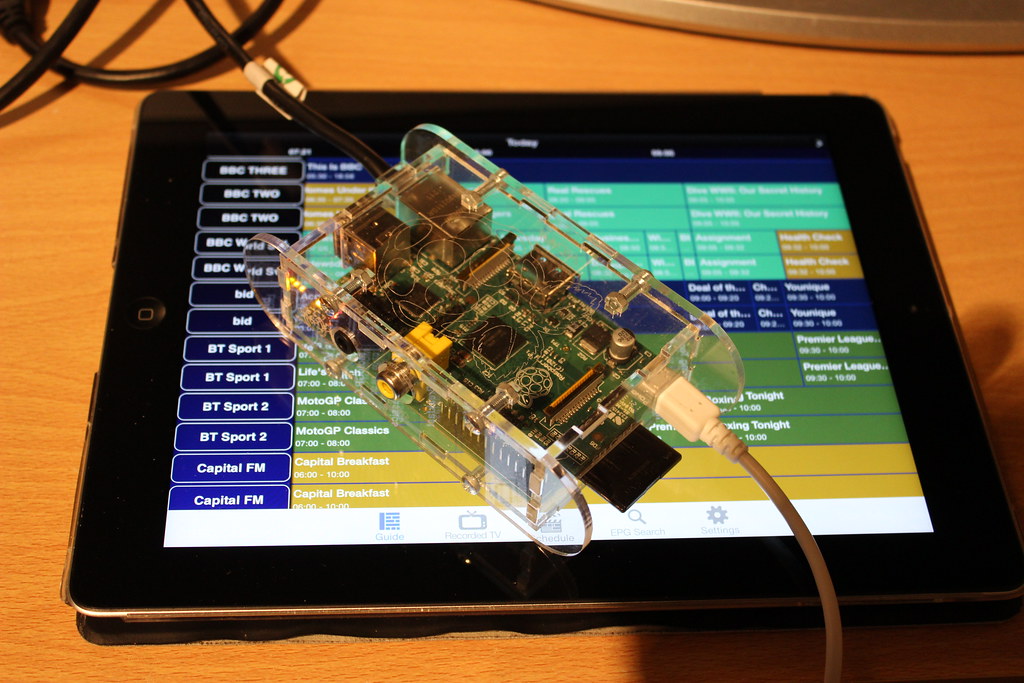 I have been using my Media Center PC as a TV server for a few years, it sits there running 24×7 churning away using lots of power and it probably isn’t the most energy efficient system. So this week I moved over my TV server to a much more efficient Raspberry Pi setup. The benefit of using Raspberry Pi are multiple, it’s very lower powered, small and much cheaper than a PC (£29!).

To use the Raspberry Pi as TV server I used DVBLogic’s DVBLink system which has clients for many platforms including iOS, Windows Phone, Android, Windows Store and works via the browser. You can also install it on a Windows Media Center machine and then access the server tuners from Media Center. Another option is to use another Raspberry Pi running XBMC as a client. With the low price of the Raspberry Pi you could afford to get a few XBMC machines up and running as a whole home solution. So by installing the tuner on the Pi you can watch live TV on virtually any device and also watch and record TV shows.

I use a HD Homerun tuner which is a network enabled DVB-T tuner but you could also use a USB tuner plugged into the Raspberry Pi. So you need a TV tuner and the DVBLink Server software (there is a free trial available) and a Raspberry Pi. DVBLink runs on Raspbian distribution so the first step is to get your Raspberry Pi up and running with Rasbpian and once you Pi is up and running you can do everything remotely via SSH.

Now you need to get the DVBLink install files. You will find the server file on DVBLogic.com, download the file and then extract the deb file from the GZ file. I downloaded the file and extracted the file on the Raspberry Pi via VNC session. At the time of writing the version is 4.6.0 so to install it go to the command line on the Raspberry Pi and execute: sudo dpkg -i dvblink-server_4.6.0_armhf_wheezy.deb

The installer will install DVBLink Server and add a server daemon to the system startup to run DVBLink automatically. Don’t worry if you are using OpenELEC on your Pi, just follow the instructions on DVBLogic.com.

From the products screen you will need to add a TV source, click on the Install button and select a TV Source. You will then need to activate it to work, select DVBLink TV Source and click on Activate, you can use a free trial which and purchase it later if it works for you.

Next you can add the TV Tuners, on my system it detected my dual HD Homerun Tuners, add the tuner and then get it to scan for channels by clicking on the Channels tab and selecting Scan.

You can pick which channels you want to show via DVBLink, so you could add them all but you may want to clean up the list (remove unsuitable channels, pay TV channels etc), and you can do this in the Channel list.

You can also change the file locations in the TV and Media Library setting so you could store recorded TV on USB attached storage rather than the Raspberry Pi’s SD Card .

DVBLink have some tips for optimising the setup on the Pi:

Now you have it up and running you can install the DVBLink app on your devices and connect to the server, you will be able to watch live TV and record TV shows from the device with the back end being performed by the Raspberry Pi.

Playback works very well, I watched live TV on my iPad and my Surface and it downloaded the EPG data over the air so I had 14 days of EPG data. You can also install XMLTV so it could work with multiple EPG sources.

The Raspberry Pi works very well as a TV server, I have it sat on top of my HD Homerun in a cupboard with it talking very little power and no keyboard or monitor plugged in, all in all its a very efficient and elegant solution. I haven’t tried any HD channels yet as my only HD tuner is PCIe which will not work with the Raspberry Pi. I would be interested to hear how others are getting on with the Pi as a TV Server.