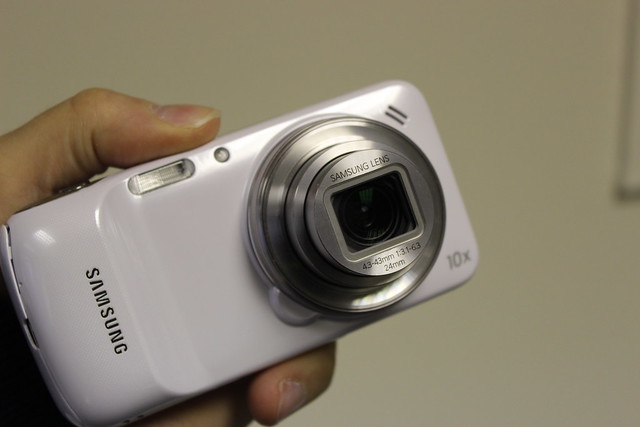 Modern smartphones have some pretty good cameras built in to them but they can’t match up to a compact camera when it comes to optical zoom. Digital zoom is ok but is not match for proper optics and Samsung’s solution for this is another version of the S4 phone, the Samsung Galaxy S4 Zoom.

First the phone specs: It has a 4.3 inch super AMOLED screen running at 960×540 with a 1.5GHz Dual Core processor running Android 4.2. You get the usual Samsung Galaxy features like Group Play, S Translator, Story Album and Samsung’s own app store. If you have used any of Samsung’s S3 or S4 range of phones you will be very familiar with the Zoom, it uses Samsung’s TouchWIZ UI layer on top of Android which I am not a big fan of but it does add extra features to the standard Android OS, especially when it comes into the camera. There is also an “Easy Mode” which is a very simple UI with larger icons and less controls which would be good for new users. The phone only has 8GB of storage but you can add a MicroSD card in for extra storage. The phone is very responsive moving around screens and apps, games like Angry Birds work well. It’s not as fast as the S4 due to its slower processor and you do get the odd bit of lag changing photo modes. Battery life is good, I was getting two or three days before charging.

What really makes the difference with the phone is the Zoom Ring and extra optics. The S4 Zoom has a Zoom Ring which when you are taking a photo controls the zoom and also works rotary dial for selecting options. There is a dedicated shutter button, tripod mount and a Xenon Flash so you’re getting a lot features you would normally see in a compact camera. The 10x zoom is excellent, much better than possible with a digital zoom. Samsung have invested a lot in the software to go with the camera, there are a lot of lots of different modes for talking pictures. There are night modes, animation modes (for creating animated gifs), macro modes and special modes like beauty face and best photo. The most useful modes seem to be Auto, Smart and Exert modes. In expert mode you can set the shutter speed, aperture, ISO and light balance. If you know what you’re doing and want full control over your photos this mode gives you a lot of control, of course there is also a full automatic mode where you don’t need to set anything. Some of the modes are more helpful than others, Beauty face enables smoothing of skin tones and enlargement of the eyes (yes really), panoramic mode stiches photos together and an indoor mode which works under low light levels. In other words there are lots of modes and tricks this camera can do.

Overall it’s an interesting device, on the one hand it’s a typical Samsung Android phone but it’s also got the extra camera features. The main extra is the optical zoom, it really makes a difference to the pictures. As you can see from some of my test photos and at the end of the video review it makes a real difference. The unlocked version costs around £479 so you are paying for high device, the S4 Mini is the closest in terms of spec and is over £100 cheaper but you don’t get the zoom. So if you need the extra camera features its well worth looking at over a compact camera but you are paying a premium compared to other devices plus its more bulky than the S4 or S4 Mini.

In this video I look at the phone features, the device performance and talk about the camera. At the end of the video there is some footage I recorded with the Samsung S4 Zoom.
[fsg_gallery id=”18″]
[fsg_gallery id=”19″]