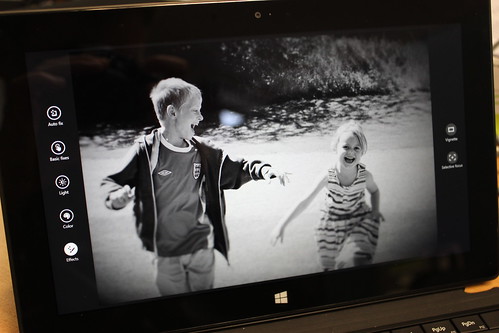 The Camera app will be able to take photos at the same time as recording video, you just tap the screen while video recording to capture a photo and there is a panoramic mode. There is also a camera loop feature that records a rapid sequence of photos enabling you to pick the best photo. Photos are automatically synced with SkyDrive so you have them backed up.

The Windows 8 version of photos app had integration with Facebook and Flickr but the 8.1 version of the app removes these features (which is a shame) and adds basic editing features. There is an autofix option, basic touch up features like red eye reduction and cropping as well as effects like selective focus. It pretty handy to be able to touch up your photos before sharing them.

The new app coming is called Movie Moments which is an app for editing and sharing videos. With the app you can trim the videos and add captions, effects and you can also add music. From the blog post it looks pretty basic but it should be good enough for cleaning up simple videos.

Movie Moments will be available later this week and the updated built in apps will be in the Windows 8.1 RTM due on the 18th.