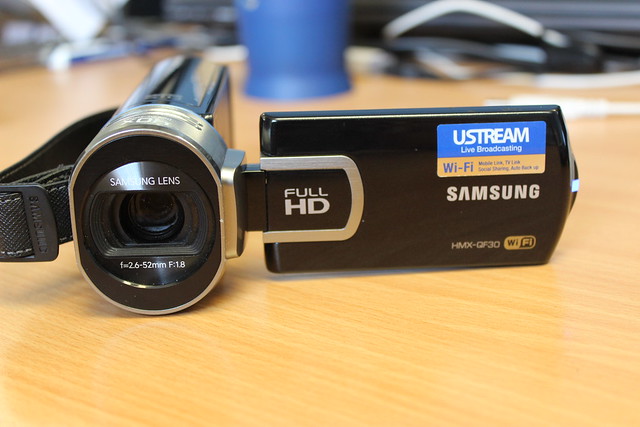 For a long while I used a Flip camera for recording videos, recently I switched to using my Canon DSLR which produces great results but is a little on the bulky side. For the last couple of weeks I have been playing with Samsung’s WiFi HD video camera which combines the small size of the Flip with the HD recording of the higher end cameras. The HMX-QF30 records HD video (1080p) to an SD card and has a 5.1MP sensor, there is 40x digital zoom and 20x optical zoom, photo and video modes. There is a fold out screen for videoing recordings which is a resistive touch screen, it’s not as good as a capacitive touch screen but perfectly adequate on a small camera. I have been using it on and off for at least a week and the battery life seems very good, I have only charged it once and there is plenty of charge left.

The best thing about the camera is how easy it is to get started, you flip out the LCD touch screen to turn it on and then press the record button and you are away. There are zoom in/out controls and its very east to operate, one issue I did find was that it could be a bit slow to focus so I would end up zooming in and out to get it to focus and by then I missed the shot but other than that it works well. There is a smart mode where everything is automatic and there are vertical videoing modes as well as something Samsung call “art film”. In art mode you can apply effects to the recording mode, there are effects like sepia and negative which while being nice I can’t see being that useful, I would rather apply effects during the editing process but I guess that some people may upload without editing (more on that later). The other mode is a time laps which you get plenty of time laps options which again are a nice effect.

There is also a photo mode which can take 5.3MP photos which while no match for a DSLR does product good photos maybe on a par with a good smartphone. Just as with the video mode there are filters you can apply, there are sepia, black and while and may other effects.

Where the Samsung works very well is with its WiFi mode. You can join a WiFi network and upload videos straight to YouTube, you can also upload photos to Facebook and Picasa. Plus you can stream directly to uStream from the camera. There is a Mobilelink app that can share photos (not videos) with a smartphone, I installed the MobileLink app on my Android phone and transferred photos to my phone, and it seemed to be slow to pair up but once it was connected transferring pictures was very fast. There is a TV Link option that works as a DNLA server so you can join a network and then access pictures and videos on a DLNA device (not just a TV).

There is a MicroHDMI connector, microUSB connector and AVI port on the device. The camera also supports Anynet+ (HDMI-CEC) so you can control it over HDMI from your TVs remote.

Overall for just under £200 (on Amazon) is a nice package, the video modes are good, low light performance is good and it’s nice and light. The WiFi features are great if you want to quickly upload videos and photos. It would be great if it supported more video streaming services, I would love to see it working with Google Hangouts but ustream is the only option.

In this video I take a look at the video camera and at the end of the video there is footage I shot on the QF30. I recorded a review of a Surface USB expander with the Samsung which you can watch here.