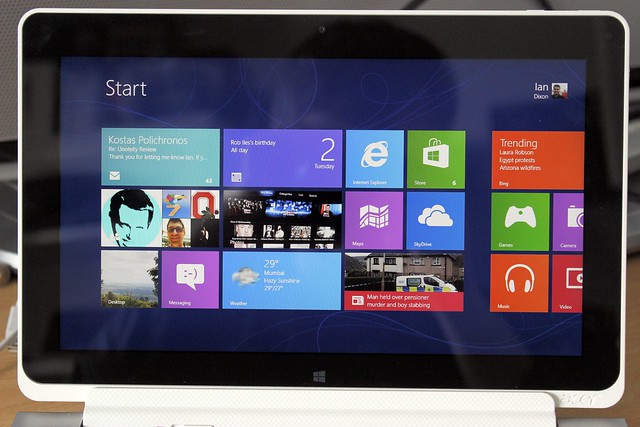 In this video we talk a look at the Acer Iconia W510 tablet PC. The tablet has a 10.1 inch screen running at 1366x 768 with an Intel Atom Z2760 processor, 2GB RAM and keyboard. What is really nice about this tablet is that it’s a 10 inch lightweight tablet and the keyboard comes with dock connector which turns it into a laptop. The keyboard/dock has a battery in it so you combined with the battery in the tablet battery you get about 18 hours of battery life.

As you will be able to see from the video the tablet is not much bigger than an iPad and it certainly feels lighter than my 3rd gen iPad. The tablet has a MicroSD slot, MicroHDMI and a MicroUSB port (which can charge the internal battery). The screen is nice and clear and the case has a nice silver finish to it.

The keyboard is very much a netbook style device and so the keys do feel cramped and there isn’t a lot of travel in them. I found the area around the Enter key is a bit cramped and I did hit the wrong key a couple of times. There is a trackpad which works ok and something missing from the W700 keyboard but it doesn’t support to finger scrolling which is something I missed, having said that you can scroll using the touch screen. There is also a single USB 2.0 port on the keyboard and the due to the battery built in the keyboard dock is heavier than the tablet. You can also have the tablet mounted backwards on the keyboard so you can use it for presenting on. 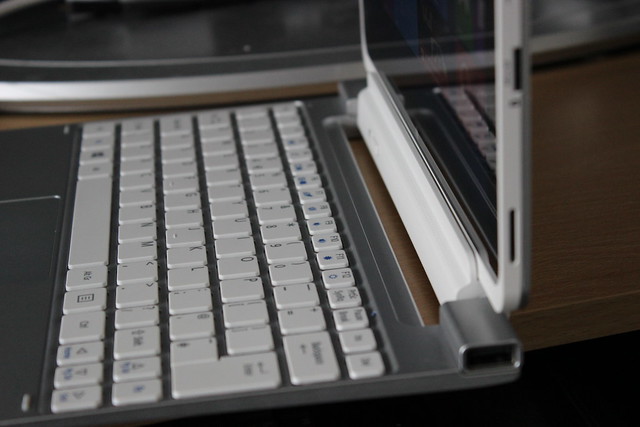 The Intel processor is no power house but the SSD drive is quick so if you are doing basic tasks on it the Iconia is nice and responsive. As it runs Windows 8 you can install your own apps and programs on it making it a versatile device. The 32GB SSD drive is a little cramped with Windows 8 installed on it but I think of this device as more of a tablet with additional keyboard than a laptop but you do have the option of installing your own programs on it.

Checkout my video for more details, I liked the W510 the build quality is reasonable and the battery is really good. Having Windows 8 on it really does make it a very useful tablet.