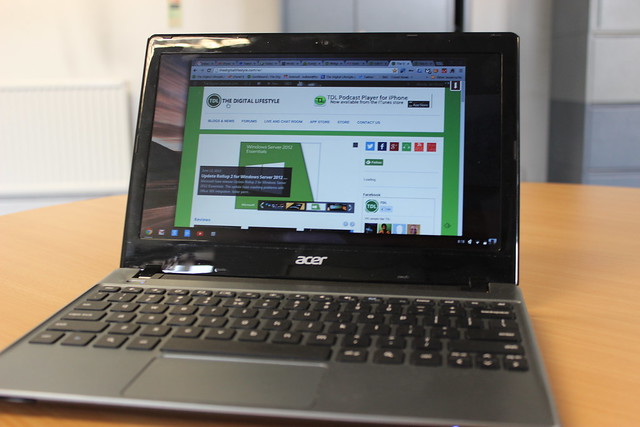 I wasn’t sure what to expect when I first tried a Chromebook. I knew that Google’s Chrome OS is built around the Chrome browser but I thought there would be other things in the mix however there isn’t it and is literally the Chrome browser and nothing else. If you want to know what a Chromebook is like, close all your programs and apps, load Chrome and there you have it, it is just a browser.

The advantage of this approach is that it’s simple and each to use, there are no service packs or software to install. The disadvantage is that you can’t install your programs so no Office or Photoshop, you get around this limitation by using webapps and Chrome has plenty of apps in the Chrome Store.

Over the last week I have been using the Chromebook for browsing the web, twitter, and writing blog posts. Once you log in to the Chromebook with your Google account you get a Chrome browser window and a small taskbar where there are shortcuts to Google services. There is also an app menu which has shortcuts to Chrome apps you have downloaded in the past. As with other platform versions of Chrome it syncs your favourites and passwords so out of the box it’s ready to use almost instantly. I use Chrome on all of my machines (expect my Surface RT) so I was up and running in minutes, I spend of lot of time in Chrome and use a few Chrome apps like Tweetdeck so I felt right at home. If you use browser apps Chrome OS is great, at the moment web based apps like Google Docs are not up to the rich features of Microsoft Office but if your needs are fairly simple then Google Docs is ok and you could use Microsoft Web apps. While I was working on it I did find Chrome a little sluggish at times, the low spec processor makes its self-know from time to time but most of the time it’s perfectly adequate.

There is one major downside, you need to be online for the browser apps to work so if you lose your network connection or using it somewhere without an internet connection the device becomes very limited. I did manage to get Google Docs working offline so I could work on documents. If you use Google Music you can stream music from your collection to the Chromebook but you can’t play music offline (at least I couldn’t find a way).

The simplicity of the Chromebook are its strongest feature and its biggest weakness. You are up and running in minutes but there are restrictions with offline use and you are limited only to web apps but if you spend a lot of time with Google Chrome and can put up with the limitations you have a very cheap notebook.

The C7 is available from the Google Play Store.