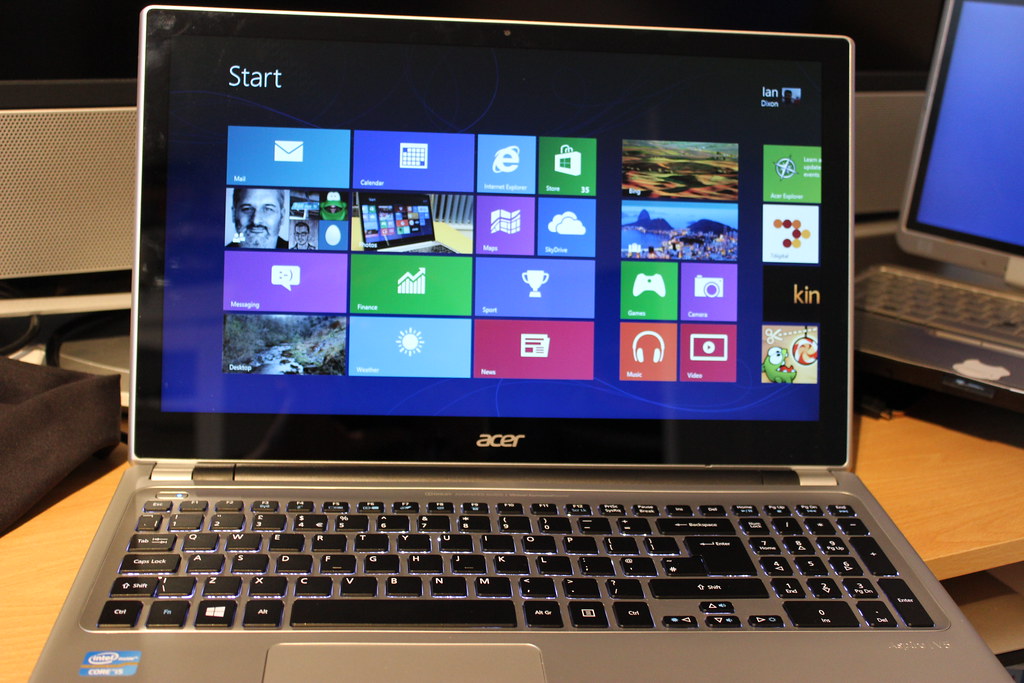 As I have said in previous reviews once you start using Windows 8 with touch you will not want to go back to a standard notebook. I recently reviewed Lenovo’s Z500 Touch and loved the touch integration and in this video I take a look at the Acer Aspire V5 Touch Notebook. The Aspire is a 15.6 inch notebook powered by an Intel Core i5 processor running at 1.7GHz , 6GB RAM and a 500GB drive, so it’s not an Ultrabook but you do get a very nice Window 8 experience on it.

It’s not particularly thin or light, it weighs 2.6kg but it’s a feels well-made and includes a DVD drive. The case is plastic and does feel a little on the budget side but the overall build quality is decent. The screen is very glossy and reflective which seems to be a trend in notebook displays, it’s bright enough for it to not be an issue and it has 10 point multi-touch which works very well. The keyboard is backlit which looks great in low light and there is a numeric keypad, there isn’t too much travel on the keyboard and it feels comfortable to use. The trackpad supports Windows 8 gestures so you can task switch or bring up the charms use either the touch screen.

Audio is handled by Dolby Advanced Audio 2 and has a reasonable sound, it’s a little bit on the lightweight side, and the volume isn’t that loud but probably as expected for a device of this size. In the box is a LAN/VGA adapter that plugs into a slot on the side, the idea being that not having the ports on the device makes the device slimmer, there is also a single USB 3 port as well as two standard USB ports. I found I was getting just over 5 hours of continue use out of the battery which is about average for this type of device.

Windows 8 doesn’t have MPEG2 decoders and there is no Windows Media Center so Acer have installed their own media app called clear.fi Media (a Windows Desktop app) that will play DVDs and other media features from local storage, network, DLNA or a Acer cloud service. There is also a clear.fi photo app which has the same local, network and Acer cloud service options. Both are decent apps and do the job fine.

Actually there isn’t that much extra software pre-installed on it. When you get to the desktop there are no shortcuts to things like eBay and other things you don’t necessarily want. There are a few Windows Store apps installed like Kindle, Netflix and ebay and there are a few Acer apps nothing to intrusive. What is included is my least favourite AV solution McAfee which I would swiftly un-install.

Overall I like the Aspire, touch on Windows 8 is great and once you start using it you will not want to go back to standard notebook. The Acer Aspire V5-571G 15.6-inch Laptop costs around £529 from Amazon and is good value for money.

In this video I review the V5 and take a look at what it can and how Windows 8 works on it. There are plenty of other reviews and videos here on TDL and we have our own YouTube channel.