This is the latest of my guest posts at The Digital Lifestyle, covering how to organise large digital music collections. I’m +Dan Gravell and I run a company called elsten software which makes software to automate keeping your music collection complete and consistent.

Album covers are a thing of the past aren’t they? Sure, there have been iconic album covers in the past. It’s easy to think of the covers for Sgt Pepper’s Lonely Hearts Club Band, London Calling and Unknown Pleasures and recall the magnificence of the music within, their place within the pop music canon. But isn’t this just misplaced sentimentality? In the days of digital music and online streaming, hasn’t album art had its day? After all, there’s nothing physical about an album anymore, so why do we need the packaging?

The truth is that a convenient form of packaging was only part of what album art provided (and those who purchased The Return of the Durutti Column didn’t even get that). Album art both symbolises and represents an album; the art’s theme and style is derived from the locale (both geographic and temporal) and the music within. It is a powerful differentiator between musical works.

As such, the album art for a record becomes part of the artistic experience of an album. It’s going to far to say an album is not complete with its artwork but, without a doubt, over time the artwork builds its own gravitas and begins to become seen as part of an album.

Artistic integrity is a timeless quality and it’s for this chief reason that album art remains important. Because it’s still seen as important by music lovers, digital music still strives to provide it.

First, there’s the traditional approach of storing music as music files on a computer or other device’s hard disk. Since the mid 1990s this has been the most common way of storing and listening to digital music. Back then the music was generally gleaned from CD, but these days the music can also be purchased and downloaded online. In this case, album art is either stored alongside the music files or within them. For the former, all files for a given album are stored in one folder, and the album art as a separate image file. For the latter, the art itself is embedded in a music file. Generally, the best approach is to embed.

More recently, there’s been the rise of the streaming music service. Spotify and Grooveshark are two examples. In these approaches you are not exposed to computer files. Instead, the music arrives like listening to a highly interactive radio. Rather, it is the responsibility of the streaming service’s user interface to correctly collect the album art and display it. 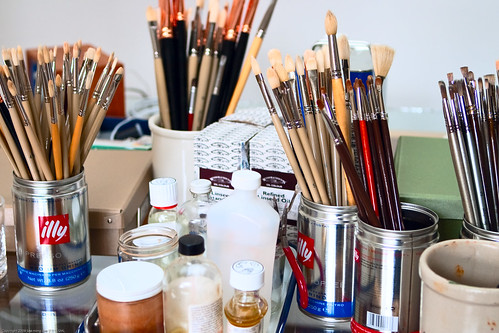 Either way, those that sell, broadcast and share digital music have worked out that album art is important. As well as for artistic integrity, it’s emerged there are other advantages with digital music.

First, album art makes it a lot easier to navigate your digital music collection. The human eye seems to process images a lot easier than it does reading text. It’s a lot easier to find the album you want to play based on its art than by looking for its name in a long list of hundreds or thousands of albums.

Second, there’s vanity. If you are hosting a party with a musical playlist you want to show off your music collection, built over many years (and with impeccable taste!). Without album art, most music players display generic blank art images for each song being played. With album art, the experience of a playlist adds a visual element, and so your music collection looks all the more impressive.

Some music players allow you to edit album art, but they tend to be a bit slower than working with specialised tools. Fortunately there’re a number of dedicated software tools to do this for you. For example, a free one I have used in the past is Album Cover Art Downloader. Another album art finder is bliss (disclaimer: I am the programmer of bliss; I wrote bliss to fully automate the process. It’s aimed at large music libraries).

Here are some things to consider when choosing an album art finder:

However you get your art, it’s worth going through the process… If only to stand back and beam with pride at your immaculate music collection!

How to stream music from an Android phone to Windows 11